An advertisement which reads ‘Hartmann’s sanitary towels made me wonder: what was it like back then, when women had their periods? Here follows a little history about women’s monthly hygiene products and the company that produced sanitary towels back then, namely the Hartmann Company (a public limited company since 1912). 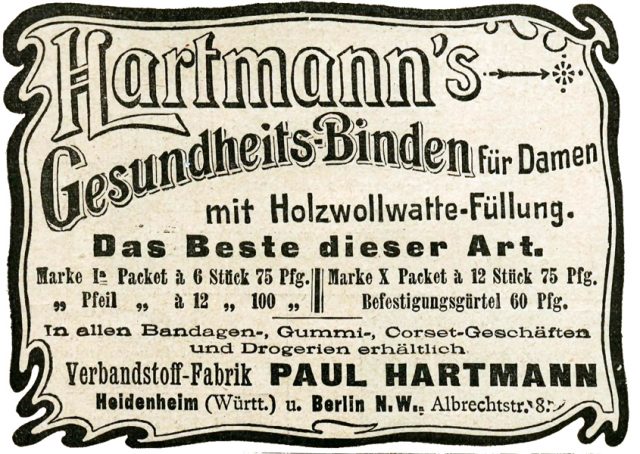 Nowadays, the company from Heidenheim is mainly known for its medical products, including disinfectants and necessary materials for operations, as well as the masks which are currently in high demand. At the beginning of the 20th century, it was one of the leading companies to produce sanitary towels for women (the first German producer) and cosmetics. I was allowed to look at the archive of the company, which allowed me to find out interesting things about its history and about the topic of monthly hygiene.

Tampons and pads – nowadays, we take these products for granted in drugstores or supermarkets, but it wasn’t always the case. In the past, women usually used cloths that they could wash, which were then attached with extra straps. This was actually better for the environment and is in trend again today for this reason, naturally in a more modern version. However, this is a delicate topic and not for everyone, which is why the single-use products are still brought by a lot of women nowadays.

Hygiene only became a big topic in the 19th century. It started in the medical world, where scientists such as Doctor Ignaz Semmelweis and Sir Joseph Lister recognised that germs were often the reason that people would die of infections. For instance, the death rate of mothers in an English maternity ward decreased from 10% to 0.2% (it had been as high as 30%) after all the doctors and nurses disinfected their hands before every treatment.

The importance of a sterile dressing, which covered infected parts, was also recognised when treating wounds. It was the Scottish scientist Sir Joseph Lister who conducted research around this. One day, he received a letter from Paul Hartmann from Heidenheim; Paul had inherited his father’s spinning mill, which had belonged to the family since 1818 and was one of the biggest spinning mills is in Wuerttemberg at the time. Addition, he had bought a bleaching and dyeing plant called ‘Scheckenbleiche’ in 1867.

After the war in 1870/71, the economic situation was difficult for the company. Inspired by his son Arthur, a doctor, Hartmann started to seriously think about the issue of the production of dressing materials and contacted various scientists and researchers about this topic. The Scottish researcher Joseph Lister replied to him and a correspondence via letters began between the two. Another adviser was the German surgeon Dr. Victor von Bruns, who was not only a gifted surgeon in the area of plastic surgery, but who also paved the way for wound treatment. 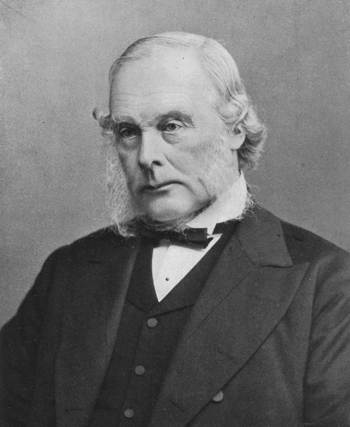 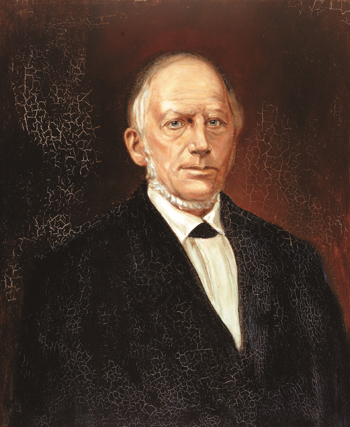 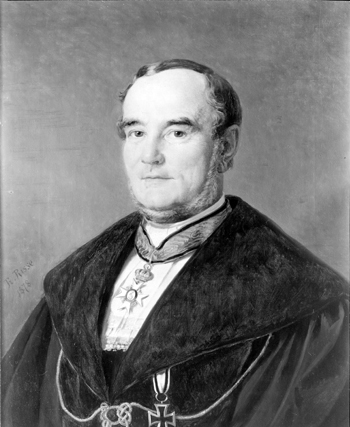 In many letters the three of them discussed how a dressing material would have to be produced in order to be absorbent and sterile. It was definitely a risk for Paul Hartmann to change his production towards this new medical product since it was new for all those involved. With help and support from Lister he was able to develop and produce a dressing material which was sterile, and with Brun’s support, the Hartmann company was the first to produce dressing materials out of cotton that effectively absorbed liquid.

While the three of them conducted an intense exchange through letters, they never met personally. In any case, the new dressing material from Heidenheim were very successful and the company expanded to different countries – the various locations are proudly presented on the letterhead. 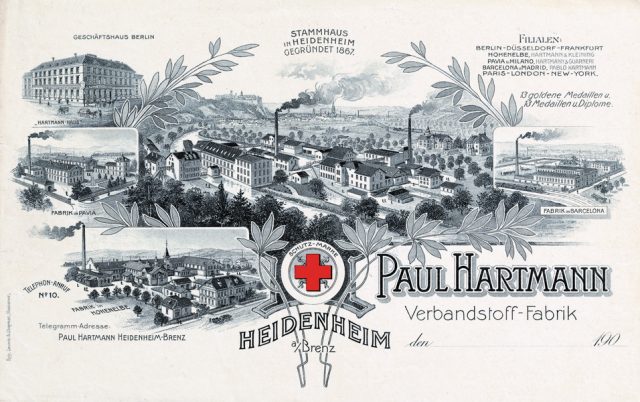 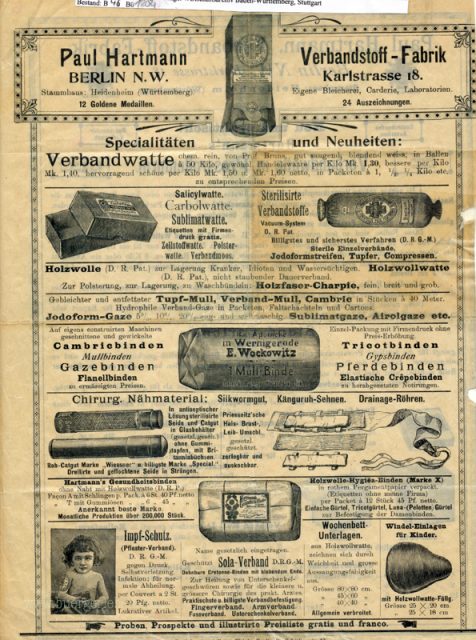 Back to our female product: the demand for dressing and gauze materials didn’t only exist in the medical area, but also in the area of monthly hygiene. This led the Hartmann company to develop single-use sanitary towels for women, made out of gauze and filled with wood-wool, in the last quarter of the 19th century. Later, the wood-wool was replaced with wadding for more expensive pads, but the simpler products (also those of other producers) continued to be filled with wood-wool. The product became a bestseller in England, but naturally there was also a high demand in Germany. 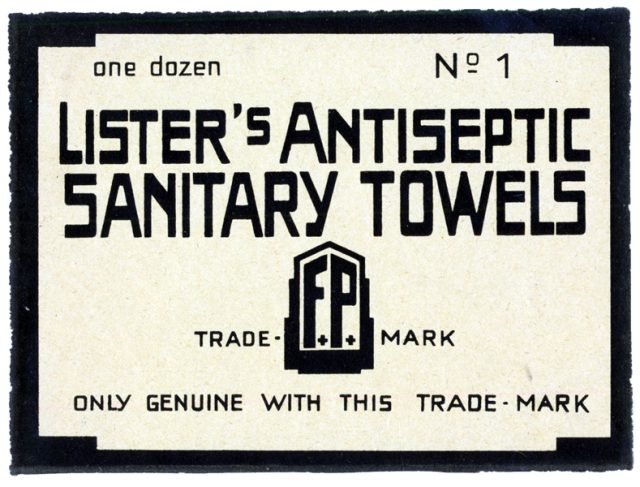 At first a bestseller in England: the sanitary pads were sold under an English brand

However, it was still a taboo topic that had to be discussed sensitively. It’s difficult to believe, but even back then many products were delivered by mail, from clothing to household products to sanitary towels. The companies put up advertisements for their products in daily and weekly magazines, for which people could pay with their last name. The Hartmann products however were only available in stores. 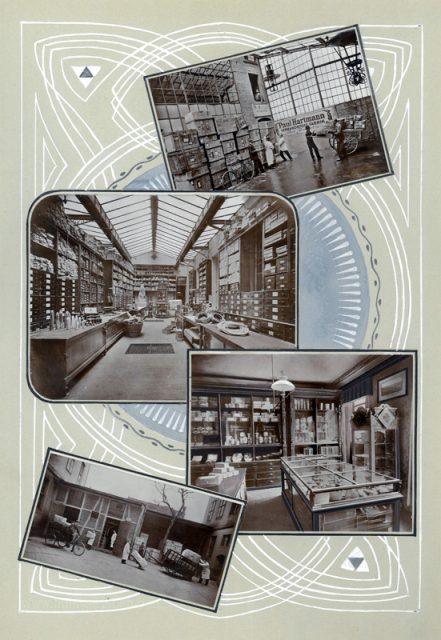 Some pictures of branch offices and storage rooms of HartmannWIRTSCHAFTSARCHIV BADEN-WÜRTTEMBERG, STUTTGART (WABW) BESTAND: b46_3_1_31

The use of the new sanitary towels was definitely not self-evident yet, as not everybody could afford them. They cost between 6 and 12 Pfennig per piece, and already back then it was cheaper to buy larger quantities at once.

For a comparison, 12 Pfennig could buy you one of the following products: a kilogram of potatoes, two eggs, half a loaf of bread, ¾ of a litre of milk, or one good cigarette.

To name a few typical incomes for the time, which was around 1900, a worker earned about 1300 to 1500 mark, a teacher in the city earned 2200 mark (her male colleagues earned a third more) a long-standing bookkeeper earned 5000 Mark. In a year, mind you!

Hence, the disposable sanitary towels were mostly used by ladies from the middle and upper classes, and even by the Empress Auguste Viktoria. A corresponding letter of thanks is preserved in the archive. 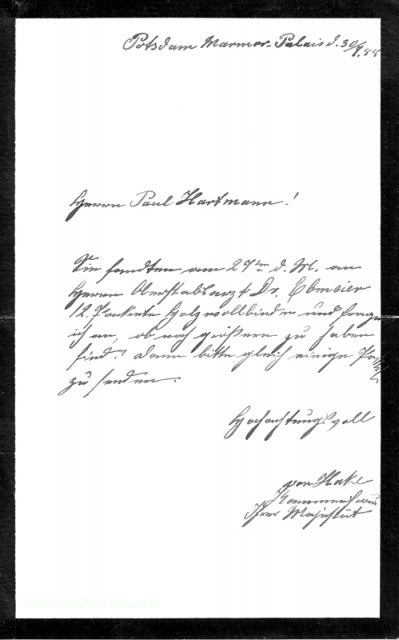 letter of thanks from the German empressWIRTSCHAFTSARCHIV BADEN-WÜRTTEMBERG, STUTTGART (WABW) BESTAND: b46_318_1 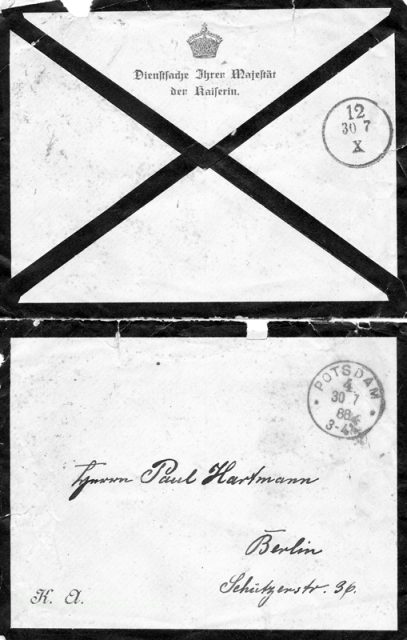 Advertisements for the sanitary products could not be found in all magazines. Conservative magazines such as ‘Die Gartenlaube’ (which in German translates to: ‘The Summer House’) often did not include them, instead, they would be found for instance in the ‘Sunday Magazine for the German Woman’ (which was the magazine’s title). The various features of the product were explained and shown in brochures, here is an example:

An advertising brochure by Hartmann

There was a strong demand for the products, leading other companies to start producing the products along with the Hartmann company at the beginning of the 20th century. In the industry for dressing materials, which was the place where sanitary towels were produced, there was a lot of competition at the time. Here are some examples of advertisements for competing products. Some companies did not hesitate to title their advertisement with blatant statements such as ‘best sanitary towels in the world’. Another single use alternative to sanitary towels, which became available around the end of the 19th century, where moss towels, which as the name suggests, we are made of peat moss. However, they were not very commercially successful. 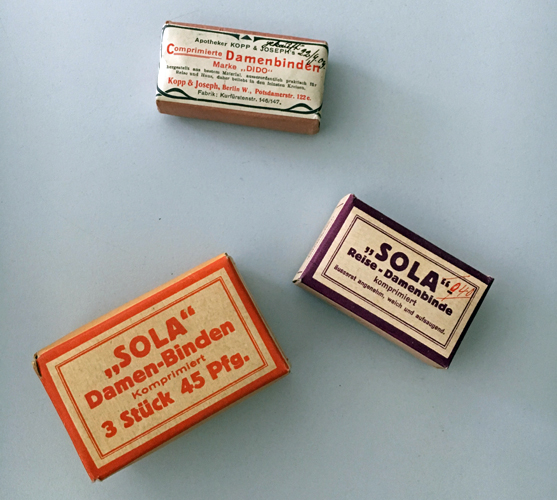 The straps to keep the towels in place could usually be bought cheaply along with the sanitary towels. The straps were necessary for the single use products, as the underwear at the time were often either too wide or open in between the legs. It wasn’t possible to stick on the sanitary towels either, hence, without the straps, there was a risk that the towels would slip!

There were various types of suspenders made of strapsWIRTSCHAFTSARCHIV BADEN-WÜRTTEMBERG, STUTTGART (WABW) BESTAND: b46_356_2 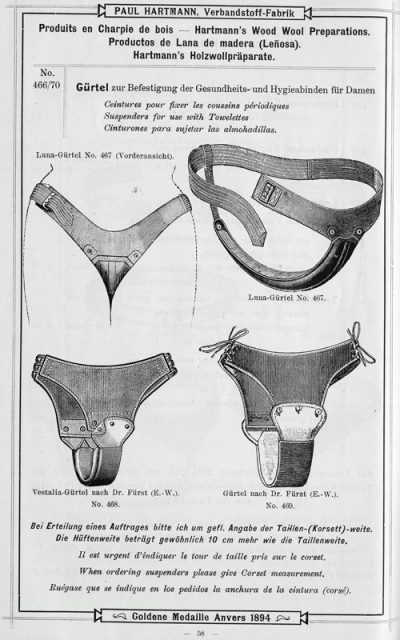 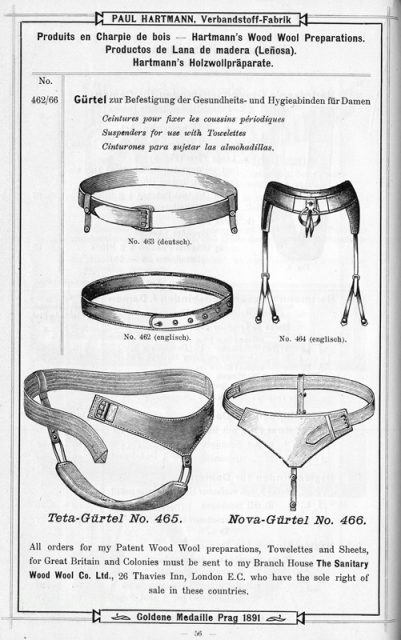 The Hartmann company extended its production to include soaps and it had its own stores in Berlin and other cities such as Frankfurt. This way the intermediate trade was eliminated, as were competitors such as the company Pech. 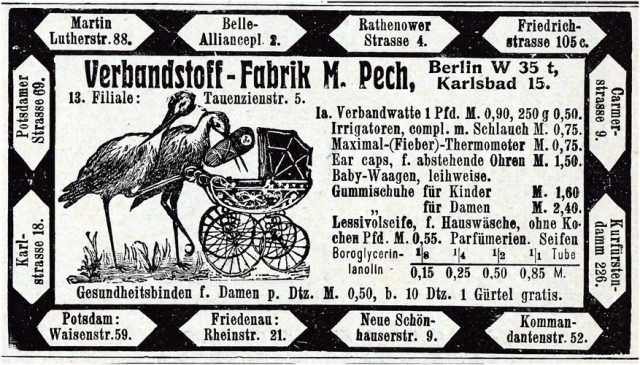 The branches of the company Pech, which was a competitor at the time

The soap produced by the Hartmann company, which promised ozone as a unique feature, was also advertised in various magazines, including the conservative ones- and the promises made in the advertisements don’t even sound so different from the ones we find today.

Advertisement from 1907 for soap

In the meantime, the monthly hygiene products, which existed in different types and sizes, were one of the main sources of income for the company. 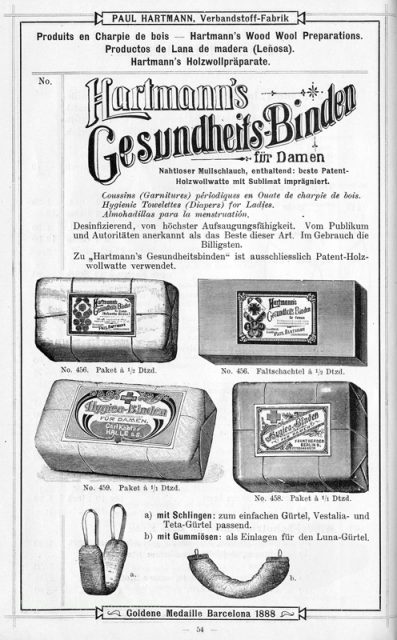 After the First World War, the company Hartmann continue to be commercially successful; after all, dressing materials were required more than ever during the war. However, any type of commerce with other countries was lost. This was compensated with new products, leading the company to also produce plasters and ointments. 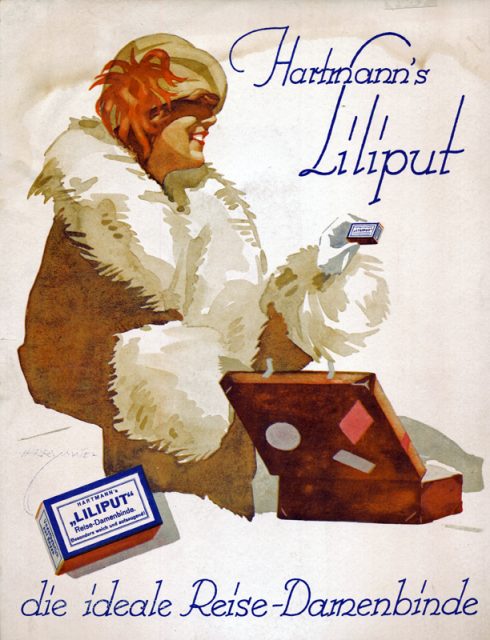 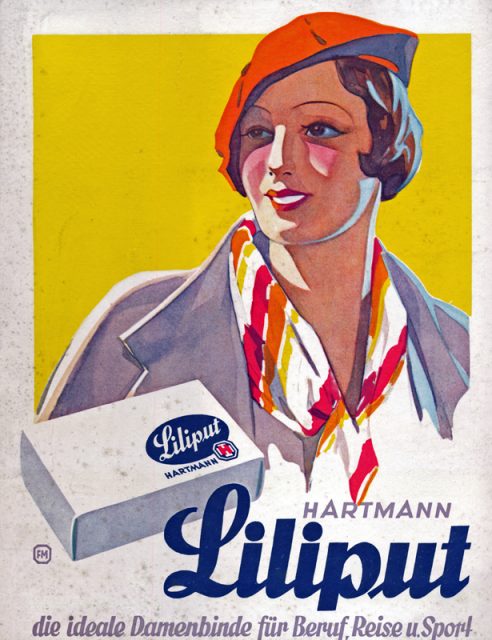 In the 1920s, the company was able to continue developing positively, and in the 1930s there was innovation in the medical area, when an ointment compress was produced, which was mainly used for burn wounds, as it did not stick to the wound. After the beginning of the Second World War, these compresses were widely used, as well as dressing materials.

The company management, which by tradition was anthroposophically oriented, wanted nothing to do with the Nazis, which was the same the other way around.

At the end of the war, all sales outside of Germany had once again been lost. 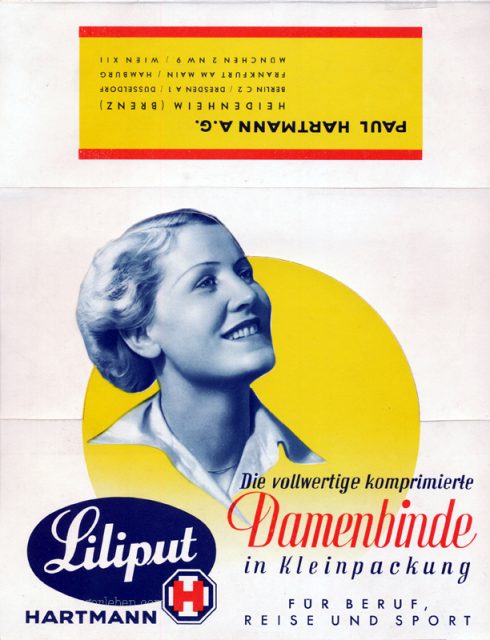 An ad from the 30sWIRTSCHAFTSARCHIV BADEN-WÜRTTEMBERG, STUTTGART (WABW) BESTAND: b46_1538_1

It was until the beginning of the 1960s that the sanitary towels continued to be stable source of income for the company. Another top seller was introduced: Pantyliners. However, the company decided to fully concentrate on the medical area in the middle of the 1960s, and since then the Hartmann sanitary products have ceased to be produced.

However, one of the first products that was ever used is still in the production programme today: cotton wool. The Hartmann company is still at the same location that it was in 1812, with its entrepreneur villa from 1813 and offices from 1912; the factory, however, was extended.

In June 2018 the company celebrated its 200th birthday and took the opportunity to look at its history.

The Hartmann company is one of the leading companies for products related to healthcare, which produces the majority of its products in Germany and Europe. The location of the company can become an important factor to ensure medical supplies for the country, especially during crises. 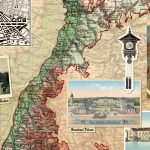 A look into the state of Baden: from black forest to Heidelberg – regions and cities (and how the people made their livings then…)States, Uncategorized 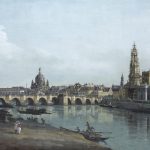 Kingdom of Saxony – from pompous state to industrial strongholdStates, Uncategorized